The Mandolin' Brothers are an italian band playing roots rock and americana music.
The concerts repertoire alternates between their original sound tracks and cover songs - always revisited and reinterpreted with a very personal touch. Along with their near three decades of activity, the band accounts for hundreds of concerts in the Italian club scene, some short tours in the USA and a regular participation at various European rock and blues festivals.

The start of the band dates back to September 1979, when Jimmy Ragazzon and Paolo Canevari started performing in a country-blues acoustic duo as the supporter group of the Treves Blues Band. In 1981 the first electric version set-up with bass and drums commits the Mandolins’ to rock-blues classics. At the beginning of the nineties, after much musical experience and as many line up changes, the band adds an accordion and keyboards and reintroduces the mandolin (this time amplified!) drawing the band closer to the roots-rock sound. The latter varies from the Mexican-border and the Louisiana-swamp-rock to the ballads of solo artists, without ever forgetting their blues roots.

In 2001 they release their first CD "FOR REAL" (Fortuna Records) which receives excellent reviews from both, specialized music magazines and web sites.

In January 2007 the Mandolin’ Brothers are invited to the USA to perform a few concerts at the Broward Centre For The Performing Arts, and at the China White Club in Fort Lauderdale, Florida.

In 2008, they publish "STILL GOT DREAMS " (produced by Massimo Visentin) voted as the 4th best Italan rock album of the year by Roots Highway Magazine.

In 2009 they publish "30 LIVES!", the live album, to celebrate their first 30 years of activity, with the sound, the groove and the good vibrations of their concerts, voted as the 4th best Italian rock album of the year by the readers of "Buscadero" magazine. In July 2009 the Mandolin’ Brothers win the selections of the I.B.C. (International Blues Challenge) and in January 2010 they play, with great success, at the New Daisy Theater and at the BB King Blues Club, in Beale St. Memphis, TN.

In December 2010 the new cd/dvd "MOON ROAD - USA 2010" is published, entirely recorded and filmed in America - with new original songs, some important "special guests" and the images of their tour in the States, assembled by the film director Piergiorgio Gay (Niente Paura - Venice International Film Festival 2010), voted as 3rd best Italian rock album of 2010 by readers of "Buscadero" magazine.

2011 - 2013: the band toured extensively, with some highlights like the invitation to the EUROPAfest, in Bucharest, Romania, in May 2012, and the partecipation to the most important Italian and Swiss blues festivals (Rootsway R&B Festival, Narcao Blues, Ameno Blues, Vallemaggia Magic Blues, Rapperswil B&J, Folkest etc.)

2014: It's published "FAR OUT" produced by Jono Manson, with special guests like Cindy Cashdollar, John Popper and others. The band has played in London at the Windmill and at O' Neill's in Southend On Sea, UK, and has toured in Italy with the Swedish songwriter Richard Lindgren.

2015: On the 50th anniversary of the publication of Highway 61 Revisited by Bob Dylan, the MB play the whole album live in concert.
"Far Out" has been voted as 2nd best Italian rock album 2014, by readers of  "Buscadero" magazine.

In the last years the MB had shared the stage with The Blasters and The Band Of Heathens.

2019: Currently they are working on a new album, due to October, on the 40th Anniversary Of Foundation! 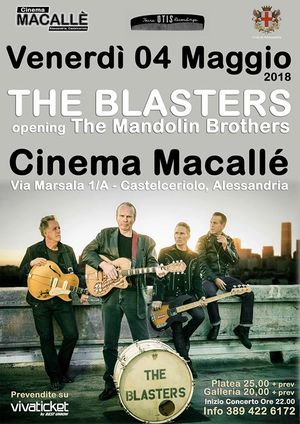